Sue was born in Spring Hope, NC in 1948 and is one of six children.  She graduated from Lynchburg College in 1986 with a Bachelor of Arts Cum Laude.  Sue was also member of the Gold Key Club (Honor Society).  She furthered her education by enrolling and completing the Society of Certified Senior Advisors, 1999.  Sue was also a Registered Investment Advisor before making her way into the insurance field.  She has received many awards from major insurance companies on behalf of Croft Senior Services, Inc. which she founded in 2004.  Sue was named “Woman of the Year” 2010-2011 from the National Association of Professional Women.  She was recognized as having demonstrated excellence and dedication within her profession and has been formally included into their membership.  Strathmore’s Who’s Who Worldwide recognized her in leadership and achievement in her occupation industry.  Stanford Who’s Who has proudly recognized Sue as an honored VIP member in their Black Book and she is a long standing member of the Bedford Chamber of Commerce.

Sue pioneered Medicare Advantage in Virginia.  In June 2004, Rubatex, Bedford’s largest industry, filed bankruptcy leaving hundreds of retirees without health and prescription coverage.  Bedford, Va is primarily a rural area, so retirees received very low Social Security income and their pensions were low.  Over the years they had sacrificed income for benefits.  The Regional Sales Manager from Unicare, a WellPoint Company, called Sue to see how he could help her increase production.  She asked him what he would suggest to help the Rubatex retirees.  He asked her if she was familiar with their Senior products.  She was not, so he directed Sue to their website.  Unicare was offering a Medicare Select plan later called Medicare Advantage, and the only zip codes were for Bedford, Lynchburg and Roanoke.  After studying the products, Sue contacted the Director of the Senior Department who came to Roanoke to recruit agents.  Agents did not understand the product.  They were convinced people lost their Medicare coverage—of course, they didn’t!  Sue, however, continued to study how the product could help area seniors.  The $9 premium was not necessary, but the company felt people would think it was of no value if there was no premium!  At this time Medicare Supplements had increased in price due to many Plans closing and the Carriers opening new Plans, so the low cost of this Unicare product was welcome—it was also a blessing for disabled individuals on Medicare.  Sue went to Hospitals and Doctors groups explaining that the Plan was a Private-Fee-For-Service type plan.  Unicare dropped the premium in 2005 and continued to be the only Medicare Advantage plan available until 2006.  Unicare also offered a Medicare Advantage Medical Savings Account which was very popular with real estate agents and retired insurance agants.  Sue worked to introduce the product in Virginia and North Carolina.  Humana was just getting started in North Carolina.  Humana’s benefits were not as comprehensive as the benefits Unicare offered, for instance, Humana only offered 7 days of skilled nursing care which forced many seniors into Medicaid.  Sue trained agents for Marketing Groups for compensation on each plan sold.

Earlier in her life, Sue enjoyed horseback riding and water skiing.  Now, when she is not in the office, she enjoys camping and spending time with her pets.  Pigeon Forge is her favorite spot to relax. Melody is a Bedford, VA native.  In addition to being a wife and mother, Melody has found time to make a career in Life and Health Insurance.

Melody has worked with Croft Insurance since 2008.  As well as working in the Medicare Market, Melody specializes in Individual Health Insurance–the Market Place and Private Insurance.  Plans have been made for Melody to continue the operations and ownership of Croft Insurance at Sue’s demise.

Melody has demonstrated honesty and dedication to meet her clients’ insurance needs over and over again. She is always willing to compare your options.  She will not only enroll you, but is there for you throughout the year as life takes many turns.  Well-trained Agents and customer service are at the top of her agenda.

In her spare time, Melody enjoys baking and catering, traveling, and being MiMi to her grandchildren. Les joined the team at Croft in February 2019 to assist Sue with the Medicare Market.  He was born in Lynchburg and has lived in the area all his life, obtaining a Bachelor’s Degree from Liberty University.  His résumé before joining the team at Croft includes over twenty-five years in customer service management.  He is very glad to put that experience to work for his clients.

In addition to his work at Croft, Les serves as the Worship Leader at his church, and is also involved in several other ministries there.  He enjoys singing, reading the classics and biographies, cooking various European cuisines, and photography.  He likes to travel and frequently makes his way to Washington, D.C., the Outer Banks, and historic sites in the area, like Monticello and Poplar Forest.  Above all these, he enjoys a quiet evening with a few friends, or even just one, sharing life stories, reading aloud, or singing–more often than not with a pot of tea and something tasty from the kitchen. Holly joined Croft Insurance Services in April of 2020 to assist with the Medicare Annual Enrollment and Medicare Savings Accounts.  She has over 15 years of customer service experience working for auto rental agencies in the Lynchburg Regional Airport.  She is currently training with Sue.

Holly was born in Maryland, but has lived in Virginia over twenty years.  She has four children.  She enjoys the outdoors, cooking, and spending time with family and friends.

Juliet joined Sue and her team in October of 2020 and has since started training to become an agent.  When she is not training, she works as the secondary receptionist, maintaining the office emails, and getting to know the Bedford locals.  One of Juliet’s favorite things about working for Sue is the fact that Croft Insurance looks after their clients and always has their best interests at heart.

Apart from work, Juliet can be found playing the piano, watching Japanese movies, or taking pictures of rural Bedford and downtown Lynchburg with her fiancée.  However, her favorite pastime is writing fiction.  She hopes to publish at least one successful novel in her life.  J R R Tolkien, C S Lewis, and Charlotte Bronte are just a few of the authors she admires, but she enjoys a variety of different stories: fantasy, fiction, and tragedy.  At the moment, Juliet is currently finishing up her associates in Accounting from Liberty University and she will graduate in the summer of this year.  She will also be getting married towards the end of July but will be back in time for AEP and more training. . . 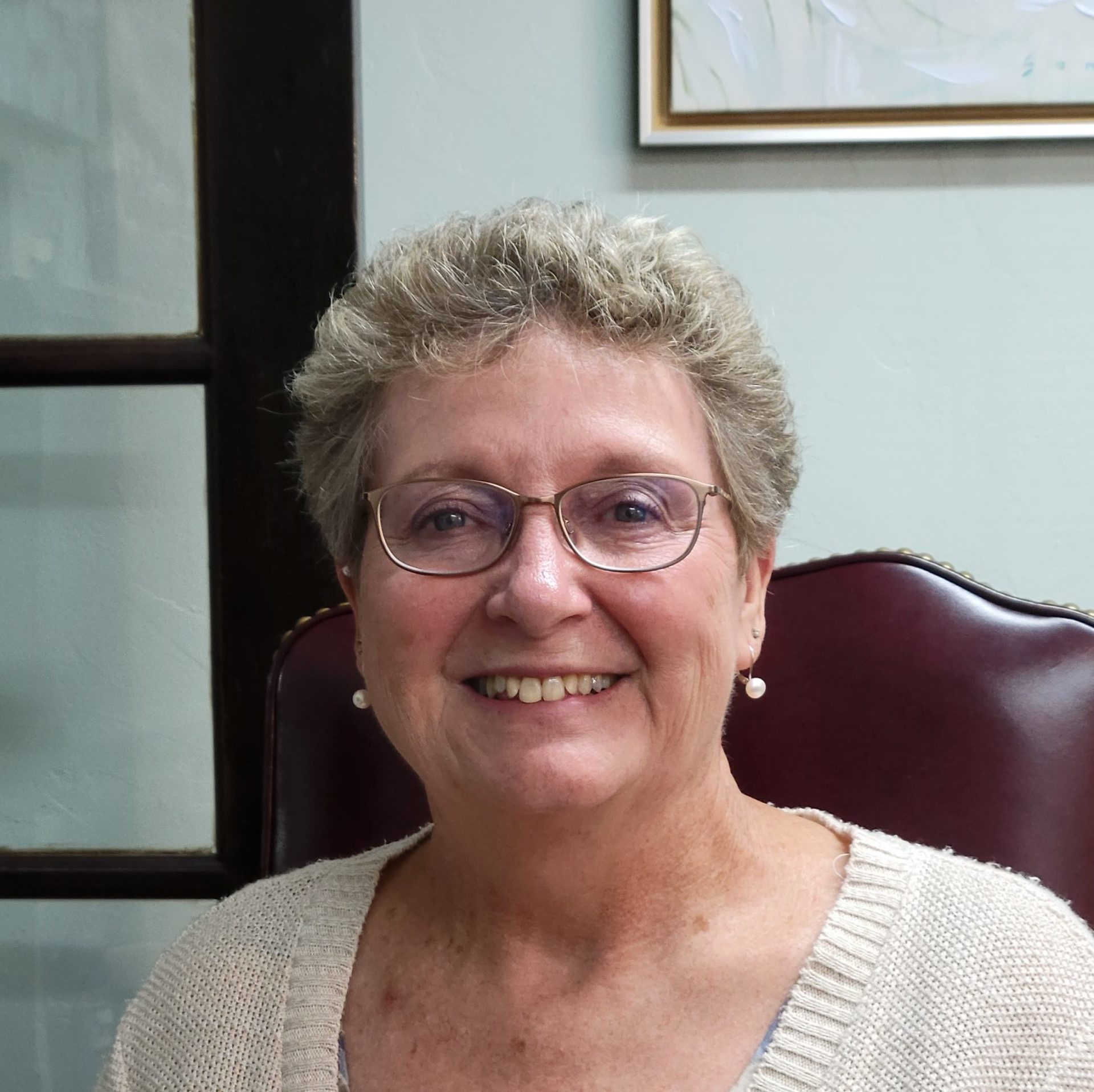 If you have called the office, or come in for an appointment, chances are you have met Janet.  She does her best to keep everyone on schedule, keep things organized, and handles it all with a cheery disposition.

In September of 2016, Janet and her husband Wayne came to talk with Sue about insurance.  Not only did Sue enroll Wayne in a supplement and prescription drug plan, but hired Janet as a receptionist!  Janet was born and raised in Botetourt County and has lived in Franklin for over 42 years.  Before her short retirement, she worked for Carilion Clinic.

Janet and Wayne have two daughters and five grandchildren.  They enjoy gardening, camping, and fishing at the Outer Banks. Snorkie doesn’t read her emails.  When she isn’t greeting clients, she can be found napping on her Princess sofa.